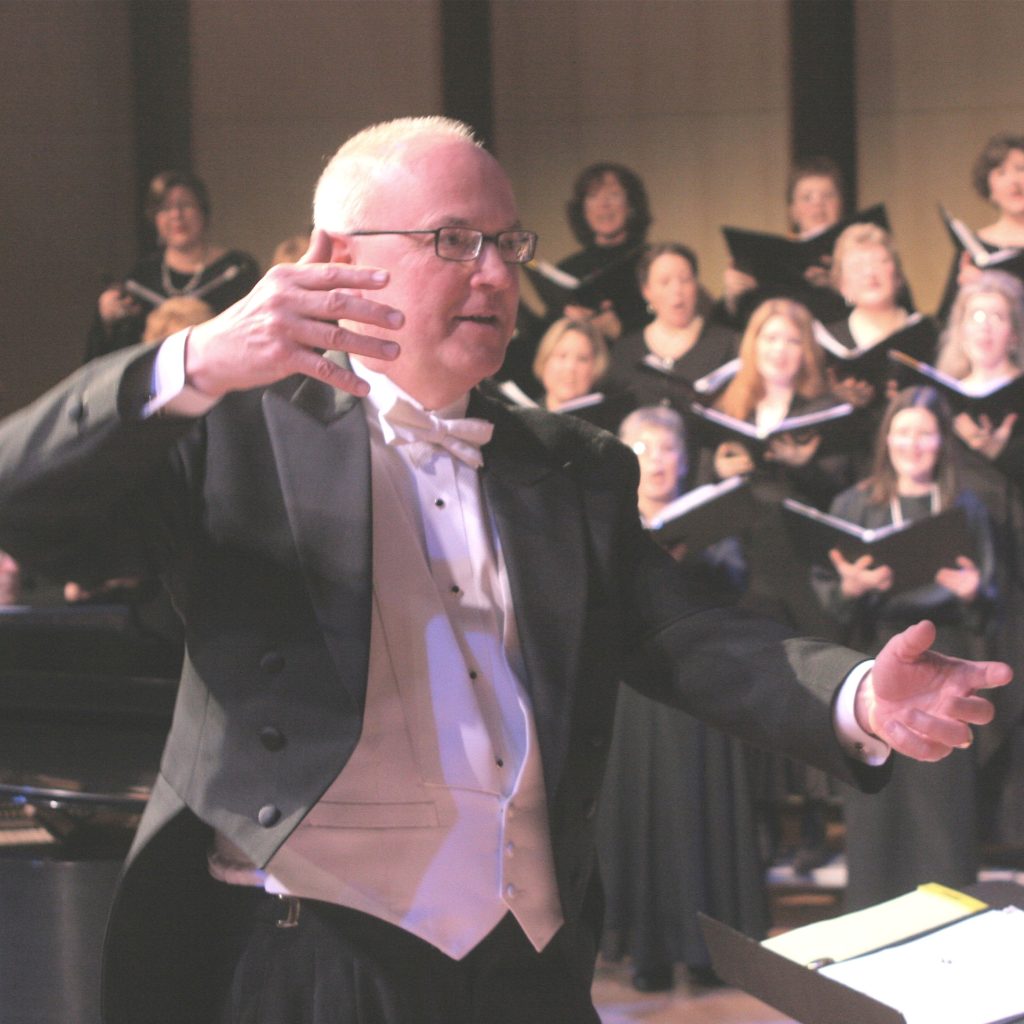 Lalitha Shivaswamy, President of the Board of Directors of the Hartford Chorale, has announced the forthcoming retirement of Music Director Richard Coffey at the end of the 2021-2022 season, following his having served seventeen years in that role.  His departure coincides with the Chorale’s celebration of its 50th anniversary. The 50th anniversary concert on Friday, May 20, will be his final conducting of the chorus as its Music Director.

Appointed as Music Director in 2005, Coffey has prepared the Chorale for many large-scale concerts of the choral-symphonic literature, the Berlioz Te Deum, the Britten War Requiem, the Requiems of Fauré, Mozart and Verdi, the Beethoven Ninth Symphony, Missa Solemnis, and Choral Fantasy, Elgar’s Dream of Gerontius, Haydn’s Te Deum, Mendelssohn’s Lobegesang, Meneely-Kyder’s Letter from Italy 1944, the Poulenc Gloria, Orff’s Carmina Burana, and more. In addition, Coffey himself has conducted the Chorale and the Hartford Symphony in performances of the Bach Christmas Oratorio, Bernstein’s Chichester Psalms, the Brahms Requiem, Handel’s Messiah, Mendelssohn’s Elijah, the Vaughan Williams Christmas cantata, Hodie, and many other works. “We knew that we were hiring an exceptional artistic and organizational leader when we hired Maestro Coffey in 2005,” said Kristen Phillips, former Board President of the Hartford Chorale, “He exceeded all of our expectations, not only for successfully leading the organization for 17 years, but also for leaving a transformational legacy that will continue to benefit the organization for years to come.” In addressing Maestro Coffey, Carolyn Kuan, Music Director of the Hartford Symphony Orchestra said, “Every time I walk into the Chorale rehearsals, there is so much love and respect for you. You are clearly special to the singers.”

Coffey’s relentless focus on choral excellence greatly benefited the Chorale. At the start of his tenure, the Maestro created a salaried professional core who provide musical, vocal, and pedagogical support. Shortly thereafter, Maestro Coffey established a program for choral interns, composed of area students and recent graduates who are provided with the opportunity to participate in all activities of the organization, including rehearsals and performances, with the guidance of a designated mentor and under the supervision of the Chorale’s Music Director. To further enhance the choral experience, the Maestro created the Chorale’s annual series of midwinter conclaves which provides opportunities for membership-enrichment, concert previews, musical and vocal training, and the presenting of regional artists, educators, and performers, in public seminars. “If I were to describe the Maestro’s approach in one word, it would be, ‘innovation’,” said Shivaswamy. “His cutting-edge approach to choral music kept the Hartford Chorale at the forefront of artistic excellence. This was particularly relevant during the pandemic when we were forced to cancel all in-person gatherings. Using only digital tools, the Maestro created our Season of Well-Reasoned Alternatives, which kept our sound alive and continued to grow our community.”

When not in rehearsal or on the podium, Coffey worked tirelessly in growing and maintaining strong ties with the Hartford Symphony, the chorus’s principal performance partner. “It has been a true honor to work with Rick as CEO of the Hartford Symphony,” said Steve Collins, President and CEO of the Hartford Symphony Orchestra. “Rick approaches every project with the highest level of professional dedication, deeply thoughtful artistry, a sincere caring for everyone involved, and a great sense of humor. He will be sorely missed!” Additionally, Coffey has garnered invitations from other orchestras who desired to engage the Chorale in concert productions, including the New Haven Symphony, the New Britain Symphony, and the Waterbury Symphony. Leif Bjaland, Artistic Director & Conductor of the Waterbury Symphony Orchestra said, “I have had the pleasure of collaborating with Richard Coffey over many years, and it has always been a joy.  He instills in his choral singers a beauty of tone, clarity of diction and incisive rhythmic accuracy. He is a thoroughly delightful person who, through his decades of music making has made many, many people very happy.”

Looking beyond a domestic choral experience, Coffey led the Chorale through three international singing tours that included performances in China, France, Hungary, Austria, and the Czech Republic. “How fortunate the Chorale has been to have Maestro Coffey at the helm.” said Dougla Pyrke, Board Emerita and former President of the Hartford Chorale. “While he will be sorely missed, we can be grateful for his brilliant leadership, both artistically and administratively.  He brought the Chorale to new levels of artistry by initiating such changes as incorporating a core of professional singers, creating an artistic planning committee, providing score markings prior to rehearsals, and attracting many new members.  Demanding and humorous, rehearsals were a joy. His expectations were high, and he set new standards for the organization. How grateful we are for all Rick Coffey has brought to the musical life of Hartford.”

Coffey began his role as musician in the greater Hartford community in 1972 when he was appointed Organist and Director of Music for the South Church of New Britain, a position he held for forty-five years.  In 1974, in association with South Church, he established the South Church Choral Society, later to become Connecticut Choral Artists (CONCORA), serving as its Artistic Director until 2014.  He likewise established the Music Series at South Church, which became one of the region’s principal presenters of local, regional, national, and international talent, and in 2003 established the Main Street Singers, a non-sectarian community choir for children in the greater New Britain area.

Coffey holds degrees in music from the University of North Carolina and the School of Sacred Music of Union Theological Seminary in New York.  In 1979 he received the premier prix d’orgue after studies with organist Marie-Claire Alain at France’s École National de Musique. He has been named Conductor of the Year by the Connecticut Chapter of the American Choral Directors Association and in 2007 received a Major Achievement Award from the Hartford Symphony Orchestra in recognition of his “outstanding and inspiring artistic leadership of the Symphony’s two major choral partners, the Hartford Chorale and CONCORA.”

In 2008, Coffey received the Greater New Britain Arts Alliance Lifetime Achievement in the Arts award and in 2009 was recipient of the Alfred Nash Patterson Lifetime Achievement Award, “presented to individuals who have made exceptional contributions to choral singing and its culture within New England.”

Coffey is currently Organist and Director of Music of the Union Church of Pocantico Hills, New York, and serves as a reviewer of choral recordings for The American Organist, the official journal of The American Guild of Organists.  He remains in frequent demand as a choral clinician, having made numerous such presentations for the organists’ guild and the American Choral Directors Association.

When asked about his departure from the Hartford Chorale, Coffey states, “Working with and for the Hartford Chorale has been one of the most exhilarating and satisfying associations of my entire career.  The singers are extraordinarily talented and dedicated, and, concert-by-concert, thrill all of those who hear them perform. The organization’s Board of Governors is a highly motivated and deeply committed panel of skilled, capable, and generous leaders. As the Chorale moves into its second half-century, it is poised to continue its trajectory of preparing and presenting the great symphonic-orchestral repertoire for the widest possible audience.”