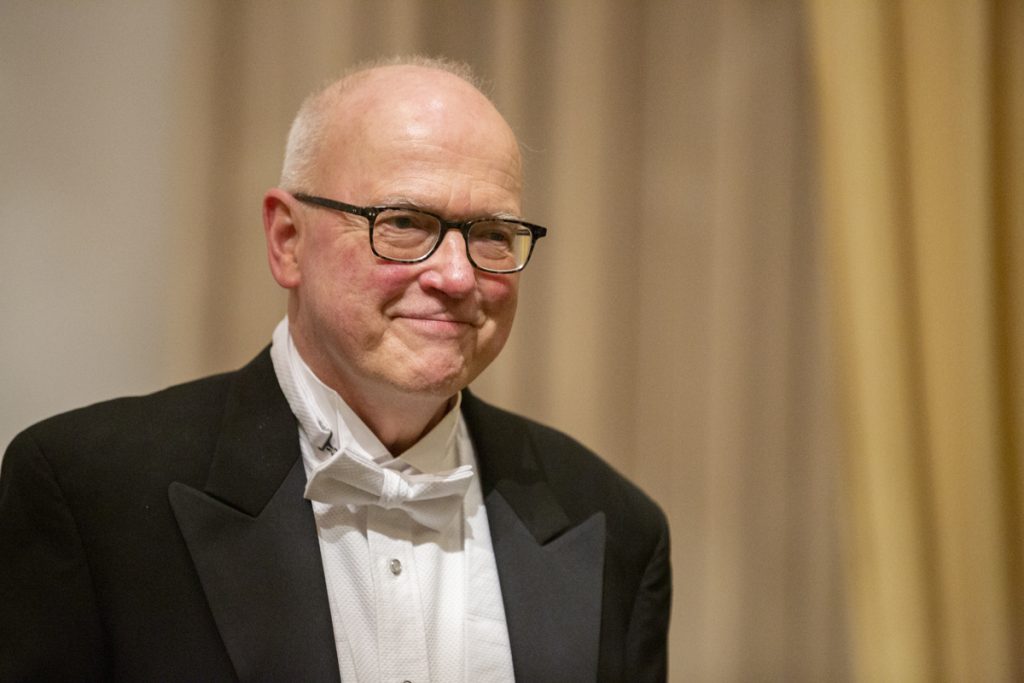 Since 2005, Richard Coffey has been the Music Director of The Hartford Chorale. In this role, Mr. Coffey has conducted the Hartford Chorale and the Hartford Symphony in concerts of major works in Hartford’s The Bushnell Center for the Performing Arts and other venues. Whether as chorusmaster or conductor, Mr. Coffey has served Hartford Chorale in acclaimed regional performances of the Bach Christmas Oratorio, the Beethoven Missa Solemnis and Ninth Symphony, the Berlioz Te Deum, the Bernstein Chichester Psalms, the Brahms Requiem, the Britten War Requiem, Elgar’s Dream of Gerontius, Handel’s Messiah, the Mozart Requiem, Orff’s Carmina Burana, the Poulenc Gloria, the Vaughan Williams Hodie, the Verdi Requiem, and Xian Xinghai’s Yellow River Cantata.

In 2017 Mr. Coffey led the Chorale on a “Jewels of Europe” tour of Vienna, Prague and Budapest, with singing engagements at the Stephensdom in Vienna, St. Salvator Church in Prague, and the 14th century Matthias Church in Budapest.

The Chorale traveled to  France in 2014 under Mr. Coffey’s direction, with performances in Chartres Cathedral and, in Paris, the American Church and Église Saint-Étienne-du-Mont, where Maurice Duruflé was for many years organist and director of music.

In 2008 Mr. Coffey and the Hartford Chorale, with the New York Choral Society, engaged in a singing tour of China at the invitation of the Chinese Cultural Ministry, presenting performances of the Beethoven Ninth Symphony and Philip Glass’s epic tone poem Itaipu.

From 1972 until 2017, Mr. Coffey was Minister of Music for the South Church of New Britain, Connecticut, where he directed a distinguished choir of professional and volunteer musicians in liturgy and in concert. In 1973 he established The Music Series at South Church, a community performing arts presenter, and in 2003, he established, through South Church, a region-wide nonsectarian choir for children, The Main Street Singers. Mr. Coffey has served on the music faculties of the Hartt School and of the University of Connecticut. From 1988 until 1993, he was Chorus Master for the Connecticut Opera Association.

In 1992, Mr. Coffey was named Choral Director of the Year by the Connecticut Chapter of the American Choral Directors Association, in recognition of “outstanding contributions to the advancement of choral music through distinguished service and the highest standards of performance.” In 2007, he received a Major Achievement Award from The Hartford Symphony Orchestra in recognition of his “outstanding and inspiring artistic leadership of the Symphony’s two major choral partners, CONCORA and The Hartford Chorale,” and in 2008 the Greater New Britain Arts Alliance presented him its award for Lifetime Achievement in the Arts. Mr. Coffey was the 2009 recipient of the Alfred Nash Patterson Lifetime Achievement Award, presented to individuals who have made exceptional contributions to choral singing and its culture within New England.

Mr. Coffey holds music degrees from the University of North Carolina and the School of Sacred Music of Union Theological Seminary in New York. In 1979 he received the premier prix d’orgue after studies with organist Marie-Claire Alain at France’s École National de Musique, Rueil-Malmaison.

In 2014, Mr. Coffey stepped down as Artistic Director of CONCORA, Connecticut Choral Artists, which he founded in 1974 as the region’s first all-professional concert choir.